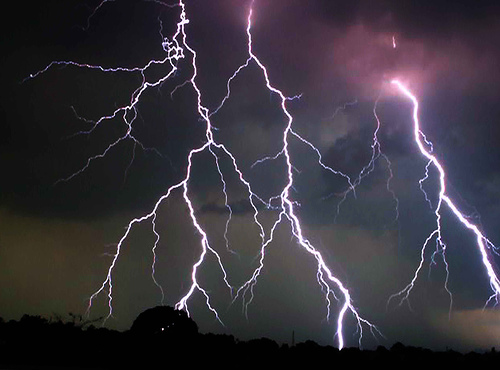 Lightning is the third most terrifying natural phenomenon. Immediately above it, and up two places from last week, the second most terrifying thing is a bald man dragging a finger across his neck and pointing at you. Riding high at number one for the ninth week running is when you find that your phone has taken a picture of your pubes through a hole in your pocket and emailed it to the Pentagon.
Lightning goes by many names. In Spanish it is called “relámpago”, which translates literally to “Did you see that? What was it? Let’s call it lightning from now on.” In Croatian it is called “munja”, which isn’t even a word.
Because lightning is made out of electricity, it can carry information; just like a computer. Lightning carries this information at such incredible speeds that during a single strike, you can transmit the entire telephone book into the clouds. However, because lightning is one-way, it will simply have to stay there until it rains.


The opposite of lightning is rubber, so if you find yourself getting struck by lightning, try to surround yourself with rubber objects. Tyres, condoms – even a small scented eraser balanced on top of your head might be enough to persuade the lightning to strike the person next to you. Watch out for televisions; lightning can live in them for up to a month, and will often change the channels if a programme comes on about how to get lightning out of your telly.
In Wes Craven’s documentary Shocker, a man who was made out of electric went into a telly and appeared in a Western with John Wayne. Most people now agree that this wouldn’t be possible, because John Wayne wouldn’t have stood for it.
There are three kinds of lightning. The most famous is Forky Lightning, pictured above. Then there is Hairy Lightning, which has a luxurious cashmere “feel appeal”, and Sunken Lightning, which happens underwater and is eaten and immediately shit out again by eels.
Lightning is extremely proud, so if you suspect there is some hiding in your house, the best way to flush it out it to walk around with a spider in your palm,  saying “what, are you scared of spiders? Big bit of lightning like you? Scared of a spider?”. Lightning will come out and say “what do you mean, there wasn’t even a spider around when I started hiding, so that doesn’t even make sense“.
Tame lightning can be used as a ladder, in lieu of a Beanstalk.
English
Spanish
French
Type text or a website address or translate a document.
Cancel
Russian
Hebrew
Romanian
???

1 thought on “Lightning: The Invisible Killer”